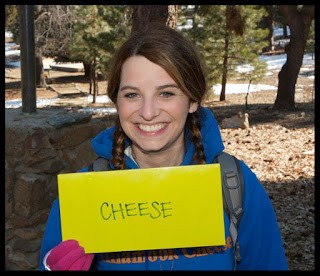 The Laurel Foundation is thrilled to announce Laura Crow,
known affectionately as Cheese, as our 2013 Volunteer of the Year. Laura has
been volunteering with our organization since 2009, when she attended her first
Winter Family Camp. Laura shared with me how she got involved,

For years, Nicole
Pepper (volunteer since 2004) would try to convince me that I would be a good
fit for Camp Laurel; so it was often in the back of my mind. I just needed a
push to actually do it. I came to a point where a chapter of my life was coming
to a close and I had that internal push to start something new. So I finally
got up the gumption to apply.
My first camp was a
blur. I remember having so much fun and being so overwhelmed in the best way
possible. It was at the final campfire that I really had a moment to reflect on
my experience. I thought to myself that no matter where I am in the world, no
matter where life takes me, no matter what, I have to come back here every
year. I remember Pepper telling me ‘I knew you would be a lifer.’ She was
right. Since that moment, Winter Family Camp has become the undisputable
fixture in my life.

Cheese, was not the only one won over, we were won over by Cheese. She has been a shining light since her very first camp. That same year she started a fundraising event, something that few volunteers
have done. The fundraising event known as PROM, has generated thousands of
dollars for The Laurel Foundation’s programs and services.

The idea started with
a conversation about the fact that as adults, the only dances we get to attend
are weddings! So I knew I wanted a dance and I knew I wanted the proceeds to go
to charity, so naturally I thought of Camp Laurel. It’s hard for people our age
to donate large amounts of money, but I wanted to provide an opportunity for my
peers to have an experience for a good cause and maybe even plant the seed in
them to volunteer one day.
My first Prom I
thought that everyone was going to dress up in nice dresses, but then people
showed up in these crazy costumes and it just sort of stuck.  I had no idea that was going to happen
and now that’s what Prom is. You can where your fancy dress or you can get
crazy and dress up in some ‘out of this world’ costume! I’ve sort of developed
this brand and now the only thing that changes every year is the theme.

Prom has done more in our community then just raise
thousands of dollars, it has raised awareness about the hundreds of children,
youth and families that The Laurel Foundation serves, who are living with
HIV/AIDS. Laura has been such a blessing to our organization.  What better way to honor her
outstanding commitment and dedication to our families then to name her
volunteer of the year?

I remember my first camp when they named
Tabasco volunteer of the year, I thought ‘Oh my goodness, that is amazing! I
have to be that one year.’ There weren’t ulterior motives; I just wanted to
strive to leave my own little footprint on Camp Laurel. I thought, ‘I would be so lucky to do
that one day.’ So every year I challenged myself to do more.
I was shocked when I found out that I was the 2013 Volunteer of the Year!  I had hoped that this would happen one
day, but I thought it might be another four years down the road. I called my
parents and my friends right away. You would have thought I had won an Oscar!
I am so honored. I
will always cherish this! Receiving congratulations and wonderful words of
thanks and encouragement from people I admire and respect: people on the board,
the staff, fellow counselors, donors, has really been the cherry on top.

Cheese you deserve every bit of congratulations and
gratitude. Thank you from the bottom of our hearts for pouring yourself into
this organization. We are so thankful for you!